Runtime:  Episode 1 is 28 minutes and 17 seconds. The special episode (shows off production art work) is 7 minutes and 5 seconds.

– Other works from Jun Kamiya:

– Other work from Akane Nagano:

– Other musical works from Toshiyuki Watanabe:

Previously licensed by ADV Films, Ooo it came from VHS. 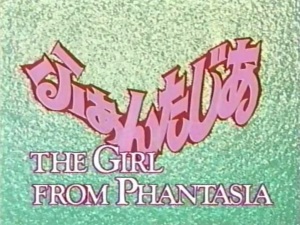 In a void we an energetic girl praise how far humans have advanced, become considerate, and loving.

After school Akihiro Ohstuki is walking home and trips over an oriental rug. After he realizes what he tripped over, Akihiro begins to day dream of what romantic endeavors might happen with his potential girl friend, Miyuki, who is coming over to his house for the first time this evening. Once home, Akihiro cleans his new found rug while cleaning a girl about his age raises from the rug. Her name is Malon. Once the two exchange smiles, they both realize that Akihiro is accidentally groping Malon’s chest. Ooo, naughty-naughty. Malon gets mad calls him a prev and performs the girly slap to knock him off of her lap.

Oh no, his mom is coming into his room!

Oh no, Miyuki might get furiously jealous at the “Big Bad Wolf” for being with a girl who has pink hair!!

Oh no, Roll is in search of the rug, which is a magical world, to destroy it due to his ancestral rage!!! 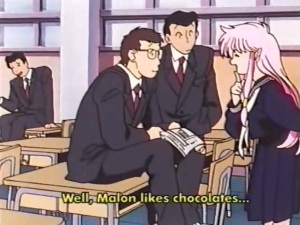 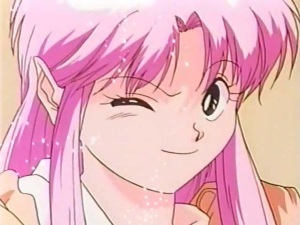 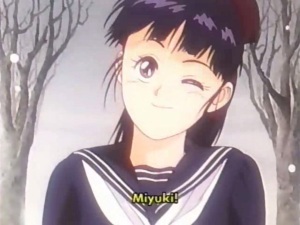 She’s not Fruity if she wants manhood.

The animation is not bad for the early nineties. It could use a re-mastering and does remind me of the Birdy the Mighty OVAs. 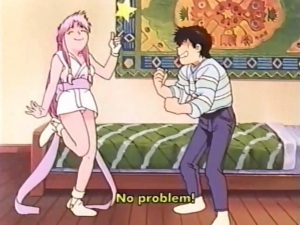 During most of the background music I keep hearing the Wedding Peach opening melody. Since it was made before the show no harm is really done when pointing out who copied who, but hearing that melody keeps reminding me of that show.

“More Than Anybody; Forever,” Sung by Masami Okui is like totally 90’s to the max with the calypso beat and lyrics about a young girls readiness for love is like a far out and interstellar groove. This would be so boss to recorder on to a mix tape.

Time to blast us some Hi-fi quality. 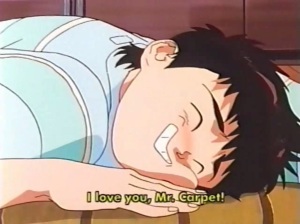 Get off the Carpet!!!

Not much can be said for this OVA. 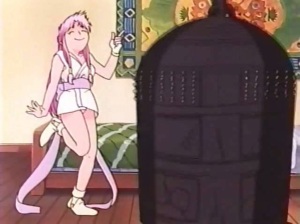 To start off with this being a single OVA a lot of the voice actors would later on get many roles in other shows including many lead roles.

As for a better explanation of the highlights: nothing is left unanswered which move the plot at a decent pace, the ending makes me want more either by more OVAs or a T.V. series or a movie about the series, and the goofy characters interactions are humorous with light prev slap-stick and silly misunderstandings while being conflicting enough to make that bite to lure the audience in.

Two scenes that recall the same topic is when Malon admits to Akihiro that she is half human and his recollection of it. While he is still mad for loosing what he worked so hard for, Malon cries that she is still a human Akihiro looks like he just killed a man. I can get her using magic and makes light of his lost situation is frustrating as it seems that Malon is mocking him which is a misunderstanding. If it showed him being pick on by his classmates or shunned by his peers his reaction would mean more and make sense.

I would recommend this show to those who like Magical Girl Friend shows or for those who would like to try this genre out. 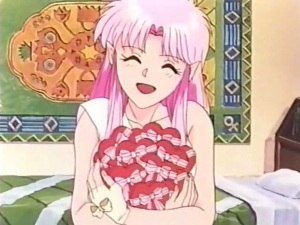 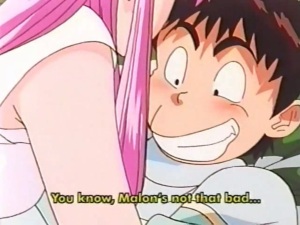 Watch out this show contains minor panty shots, and yes they are white.

Remember to comment below to let me understand what you think about the article.

For other reviews related please click any bold blue titles below: