-Story Insight:
This is a variant of the Momotarō folklore. A gigantic peach the floats down the river. A childless elderly couple grabs the peach takes it home. When they cut open the peach a girl was berthed from it along with a ring and sheathed dagger. From that peach the story will focus on the peach born girl Momoko and her adventures with Inugami, Sarugami, and Kijigami her childhood guardians. Along her adventures she alies with the Celestial Maidens, a group of angelic guardians, and the Royal Onmyoji. Onihime and the oni kingdom will stand in Momoko’s way to gather all the shards of the Michimi Peach Crystal.

Momoko will from a rivalry with the Onihime, complete the Michimi Peach, and will search out for answers of who she is and what the items she had from birth will mean for the future.

Name: Sarugami
Age: Monkey God
Gender: Male
Personality: Prev, Like a boxing coach in combat, and thinks carefully.
Role: Main Character, Protagonist, a Hot springs monkey who has a red monkey butt and has a similar face like Lupin’s in some scenes.
Arsenal: Fights like a censored hot springs monkey; however, when fused with Momoko she becomes a cat/tiger claw (or bagh naka) wielder (Speed Focused). 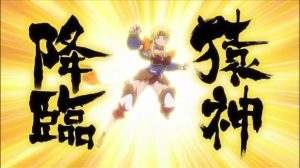 Name: Kijigami
Age:  Pheasant God/Young Women
Gender: Female (All females are kind.)
Personality: Like an older sister to Momoko
Role: Main Character, Protagonist, a Pheasant God who can transform into a young female to deliver more service like pizza hut.
Arsenal: Obviously she is ideal for aerial combat and scouting; however, when fused with Momoko she becomes her wings and becomes a bow wielder (Distance Focused).

Leader: Sumeragi Tennyo (Right)
What about her: Angelic god and an old greedy woman who wants to look young.

Assistant: Kushinada (Left)
What about her: She has a self sacrificing fetish whose sweet and to the point.

Celestial Maiden of Fire: Ringo (means apple)
What about her: She is concern for Momoko, cheerful and is righteous.
Arsenal:  Light common magic, she is strong with her fire abilities, and uses a (weapon in picture I don’t know what it’s called). 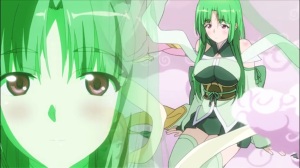 Celestial Maiden of Water: Suika (watermelon)
What about her: She is very kind, verbally harsh with her allies, and full of sass with her big breasts.
Arsenal: Light common magic, water abilities, and uses a Cakraratna (a metal spiked wooden spooked wheel).

Celestial Maiden of Earth: Maron (chestnut)
What about her: She can be cold while completing her tasks, but she is passionate about her responsibilities. She is also the brains as she shivers from having a small/flat chest.
Arsenal: Light common magic, earth abilities, and uses her Mallet.

Celestial Maiden of Wind: Karin (quince, a type of pear)
What about her: A friendly air head whose naïve personality causes her to lose a Peach fragment. She also has a small/flat chest.
Arsenal: Some light magic, wind abilities, and uses her beads… 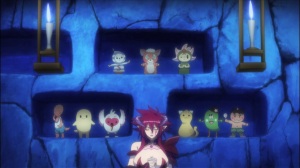 Demon King: Jakiou
What about him: He wants to restore his kingdom to its full glory by obtaining all of the peach fragments, very reasonable in strategy, and father of Onihime.
Arsenal: Major magic, bastard sword, power, and kingdom of all beings oni. 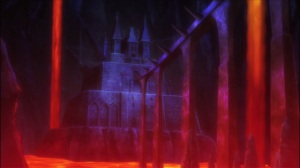 Oni General One: Tekki
What about him: A big beast of a demon who follows the strongest, Momoko’s first Oni encounter, comes back tough, and doesn’t escort Onihime.
Arsenal: Iron rod and hoards of Oni.

Oni General Two: Genki
What about him: Prev, youngest and weakest of the four, escorts Onihime, friendlier of the Oni, and might have a relationship with Enki.
Arsenal:  Pipe, casts illusions, and hoards of Oni.

Oni General Three: Enki
What about her: Prev, escorts Onihime, like an older sister to Onihime, friendlier of the Oni, and might have a relationship with Genki.
Arsenal: Love, whip, and hoards of Oni. 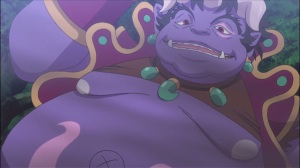 Oni General Four: Youki
What about him: Nasty, vile, and greedy with his motives.
Arsenal: Gourd of poison fog, cunning, and hoards of demons.

Familiar: Tōtetsu (In blue)
What about him… her… it’s a him… him: Mysterious young boy who’s misunderstood, and familiar to Abe Seimei.
Arsenal: Support magic.

-Animation:
I found the animation to be bright and cheerful which matches the tone. I couldn’t see any errors. 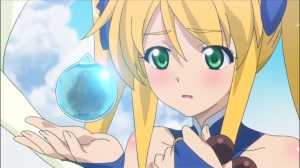 -Sound:
I didn’t hear any off syncs or notice anything not playing its noise in the background for sound effects.
The background music (BMG) makes me want to replay The Lengend of the Mystical Ninja on SNES.
I did enjoy the music.  The opening song Momoiro Fantasy (Pink Color Fantasy) by Haruka Chisuga is cheerful and soothing while being played with a peachy and adventurous animation does help to get me engaged into the show. The ending song Momo Kyun Sword by Ayana Taketatsu is well soothing and cheerful and leaves me in an upper. There is another song in the show I also liked but I think it’s a self promotion of the music group the voice actors are a part of. 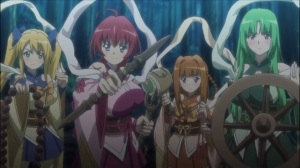 I’m starting to think ‘momo’ is Japanese for peach.

Momo Kyun Sword originally started out as a free online light novel and written by a collaboration of writers as they call themselves the Kibidango Project. I couldn’t find much more than that for the show’s history besides calling it a gender bent tale of Momotarō.

This show does follow a familiar format that 2013 and 2014 have done. First few episodes are the beginning story, shenanigans in between, and a full plot is completed at the last third of the season. So far, the shows I’ve watched with this format haven’t repeated their plots to feel that they are a bland copy of another show and the trouble they get into is enjoyable. Well no harm done yet?

My experience has been enjoyable. It is a show you can mellow out to and can bring some enjoyment into an end of a bad day. This show does has a premise is similar to Inuyasha, but it does not have a problem collecting in an episode dragging pace. The action is standoff-ish, but with it being in a campy sense like The Slayers with a shot of Pok`emon. I find the action not brutal but easy to enjoy and mellow throughout. After most fights Momoko’s cloths will explode into shreds. Why? Watch the show. :3

Their tongue and cheek moments if you don’t like them then you’re not the demographic.

I can see a lot of people not giving it a chance because of Momoko’s peaches and fan service moments, but if you look past that the characters do develop and unfold for the viewer. With these slight nudges and un-creases, the world does unfold as the characters become more define with a personality.

I did enjoy the character interactions with one another like how the Celestial Maidens interact with one another either by performing their jobs or general talk even when Momoko is included. Some characters have a sister like relationship which makes many scenes enjoyable. Honestly, I kind of wished for a high school series with these characters or similar. What I didn’t initially know is that the script writer Tsuyoshi Tamai also wrote the script for the Nogizaka Haruka no Himitsu series which fit’s this category. I might review this show at some point.

A bad guy that I liked while watching the show is Youki. He is the fat kid who wants to cause harm in order to achieve his personal gain/goal. Every time he shows up on screen, I just want to see what mayhem her can cause.

One conflict that happens many times with the show is Momoko and Onihime’s rivalry. Even though the two will battle each other to complete their common goals, they still can become caring best friends. Their first encounter is hilarious.

Demographic:
+13 Shōnen
Not a dire serious story, but it does have a story for the viewer to relax on.
Dose contains Jiggles and Wiggles.

Remember to comment below to let me understand what you think about the article.

Also their is nothing more cheekier than ass cheeks.

For other reviews related please click any bold blue titles below: