Where does the time go? Eaten by time ghouls I suppose. Spoilers after the break.

We cold open episode five with Kaneki still having nightmares about being eaten by the gourmet. Once again we see the major themes of eat or be eaten rise up in this show. The whole thing provides a surreal, visceral experience. Kaneki first dreams of being dragged off by figures in masks – the same kind of masks work by many of the ghouls in the gourmet club. He reaches out for rescue, only to have Tsukiyama grab for him.

After the opening, we switch back to a light-hearted anime about ghouls awkwardly living together in coffee shop. Touka’s friend shows up and sees Touka and Kaneki together. Wacky misunderstandings ensue! Oh, Touka, you can’t eat your friends beef stew – it’ll make you sick! Nothing funnier than someone deliberately poisoning themselves.

We cut away briefly to Tsukiyama, and are treated to another one of his on-screen near orgasms. I have a passion for food myself, but I wish I could be that enthused about it.

Kaneki discovers Nishio, the asshole from the first few episodes, getting his ass kicked in an alley, and decides to intervene. Nishio is badly hurt, so Kaneki takes him back to his human girlfriend, Kimi. Here the show starts exploring certain concepts about ghoul-human love and relationships. Initially Nishio is only interested in his girlfriend as an eventual food source, but Kimi’s willingness to sacrifice herself for his benefit touches him to think of her as something more. It’d almost be a sweet love story – if it wasn’t about cannibalism. 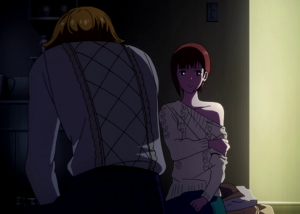 When a girl starts undressing and begging you to eat her, you don’t ask questions.

Kimi and Kaneki are going there separate ways when Kimi is kidnapped by the Gourmet in a bid to make the ultimate dish. Tsukiyama’s inspiration is to eat Kaneki while Kaneki, driven to the point of insatiable hunger, eats Kimi, like some sort of ghoulish turducken. 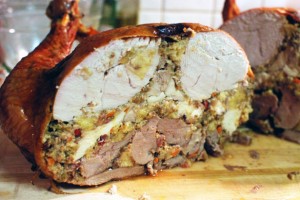 The rest of the episode is devoted to an awesome fight scene where Kaneki, a weakened Touka, and Nishio all attempt to take down the Gourmet. One of the more interesting bits of information revealed int his fight is that the hungrier a ghoul is, the weaker they are. There is an interesting moral quandary to be had here; ghouls who try not to give into their hunger are at a distinct disadvantage to more murderous ghouls, and thus are incentivised to eat as much as possible so as to be able to fight off the more ravenous. 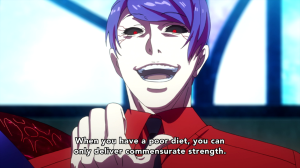 This episode seems to bring a certain closure to the Gourmet arc. It’s a solid episode with a strong sense of closure. Now, onto the next episode! Gotta get 6 and 7 out the door! Also stay tuned for my D&D Next/5th Edition/D&D 2014 review.