This week on Sailor Moon Crystal, it’s time to get started with a scene of the villians. We get introduced more formally to the bad guy generals with the appearance of two more, Nephrite and Zoisite and I…

Listen. This is a problem I’m having that I’m sure a lot of people are having. 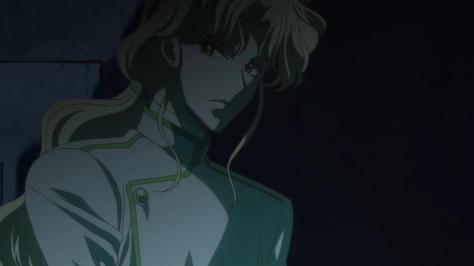 This character. Right here. Zoisite. In the original English Dub they made this character a woman due to their relationship with one of the other generals, who is also a guy. I’m not saying anything bad about their relationship I’m just stating that it’s still taking me a bit to internalize Zoisite as being a Bishounen not a woman. The obviously male voice is helping that.

After that we get a bit of a pre-credits tease of a Shrine Maiden divining something sinister from a fire.

Once the opening is done we get the major pieces of information down rather simultaneously. Shrine Maiden’s name is Rei and there’s an eeeeeeeeeeeevil bus that is supposedly kidnapping people. Spooky.

After being asked to find a missing girl, and saying she can’t find her that exactly with her powers like a responsible person with powers, Rei tries anyway and sees Jadeite seemingly capturing Usagi, who has been following Rei “Because she is so beautiful.” Or as I call it “Because reasons.” Rei ends up being captured and Usagi has to save her from the eeeeeeeeeeeeeevil bus.

This also involves transforming into a flight attendant. Because reasons.

After some transforming and teleportation via stock-footage, Sailors Moon and Mercury confront Jadeite and his pile of kidnapped people, but there’s a problem. He has ICE powers. Oh no! That counters Mercury’s already kinda useless fog power AND freezes Moon’s arms so she can’t throw Tiara.

Yeah. This is going exactly where you are expecting. They get Jadeite to flee, rescue the peoples and leave.

Next time: And episode where they have to win WITHOUT the “Get a New Party Member Victory Flag.”

Sailor Moon Crystal is available on Crunchyroll and is licensed by Viz.