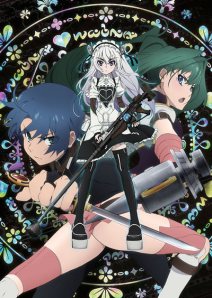 Currently 1 Season with 12 episodes, but a 2nd will air this fall.

Currently Hanabee Entertainment is airing this on Crunchy roll. Sentai Filmworks currently holds the DVD/Blu-ray rights. I hope this will be a hybrid release.

Our story begins with Toru Acura slashing through the forest. He is looking for loose loot and food. While scavenging he encounters a youthful pale white girl with platinum white hair sporting a fashionable summer coffin as she pops out of the tall grass. He questions her motives only to find out that she has been lost for three days in the woods. Soon the two are attacked by a unicorn.  The two dart away but only to find that they would only end up facing against the prancing beast. After their quarrel the beast ends up defeated in a brilliantly gory fashion. Soon after, the two leave to go chow down at the town’s pub. As they eat, we are now introduced to our third main character Akari Acura which is Toru’s sister. She enters the bar swinging a sledge hammer chaotically as she questions him where her breakfast is as it was his turn to hunt for food since they were jobless. The mysterious girl pays for the food and the wreckage from the siblings’ quarrel and offers the two Saboteurs (Assassins/Ninjas pretty much) to help her with her quest as she introduces herself as Chaika.

This story has a great build up of characters and adventure while tackling a simple plot. The main plot is Chaika and her three friends will travel to a destroyed kingdom to retrieve the former emperor/great-magician Gaz’s corpse parts which were spoils to The Eight Great Warriors in the war. The pace feels natural as the tones can change from möe laughable to revealing serious. Each episode has a plot and will either develop the character, surroundings, or rise of conflict. Towards the last third of season one, I have found myself gripping the edge of my seat as the fast-paced action hits my screen and their dire situation grows with more intensity. After each turn of events comes a more shocking detail to either our four protagonists to endure or reveal about another character. 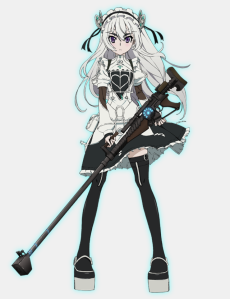 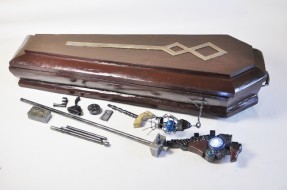 Chaika Trabant is a mage-tech princess with an unknown past and daughter of the late Emperor Gaz. Her personality is a sweetly, kind, gentle-airheaded-klutz who is naïve. So naïve that she can take it to a möe level about the same as Index’s (from A Certain Magical Index). Another flaw that she has is that she can only say only a few words at a time. Very similar to Ikaros’s (from Heaven’s Lost Property) speech pattern, Chaika must deal with this handicap, but luckily she can say more up to some partial phrases. Even with her flaws her strong suits are her vast knowledge in mage lore and iron will. Her weapon of choice is the Gundo Sniper Rifle, and what this groovy magi-tech baby can do is cast high-precision spells at long ranges. Her preferred holster to store her rifle is the coffin. As it can fit the complete gun in length, the coffin can store each component of the rifle as she collapses it. To use the magi-tech in this world, Chaika must use a choker (not sure if it could be any other article of clothing) and take its cord to tap into the device. Also the device needs a special type of fuel which the caster can buy or X as the show will reveals. Whatever you do, do not make fun of her thick eye brows. Chaika will pout, get fussy, or tear up. 4 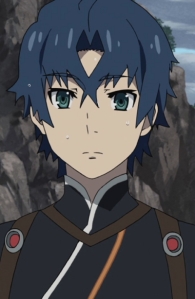 Once lived in a small river valley town, Toru Acura trained to become a top notch Saboteurs. Now full grown, he has no job and lives like a peddler until their encounter with Chiaka. He often will reason the logic to their situation and assist Chaika to reevaluate her next action. With his training and his preferred weapons of duel knifes/short-swords (for me it’s hard to tell) and usage of rogue gear. In battle he is cunningly tactful like a fox, agile as an acrobat, and can chop through enemy lines in close combat. He and his sister have a transformation called “Iron Blood.” In this form their body will slim with and glow like molten steel. They are faster and stronger making the Acura siblings a fierce opponent to fight against. 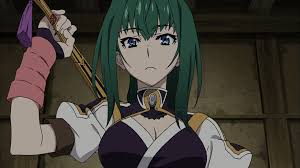 Orphaned at a young age, Akari Acura grew up with Toru and underwent the same training to become a Saboteur. Her nick name is “Toru’s Shadow.” She is normally silent and polite when she talks; however, she is a bit grumpy and dumb at times. She does have feelings towards him and proceeds to subtly show her affection with sass and over-the-top jealous rage. When her brother isn’t around though, she does make competent decisions and can socialize well with others. Her preferred weapon is a sledge hammer and can use throwing knifes and rogue gear as well. She can also craft/use poison needles and throwing knifes explosives. As explained in Toru’s bio, she also can use the “Iron Blood” transformation. 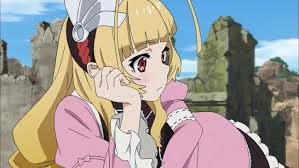 Later revealed in season 1, this blonde is spunky, chaotic, and lovable. Skilled as a Dragoon, her abilities are proven to be a dire need for Chaika and friends after they settled the events of X. Her preferred weapon is a long sword. She is not the brightest, but from what she is out of her people she is considered to be intelligent, and often shown in the background are her hunting talents. 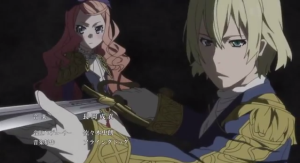 This military group is a part of the Kliemann Agency. This agency was developed after the war to help civilians and veterans rebuild their lives during this reconstruction period. This particular corps is composed of six members. The ones shown in the picture above are the leader, Alveric Gillette the blond male, and the second-in-command, Nikolai Avtotor the strawberry-blonde girl with long hair. Along with reporting what damage the post-war has had on the public, they also hunt down Chiaka’s group to prevent them from collecting the corps pieces and attempt to maintain the current political order.

For now the animation has its own distinct style and is similar in my eyes to Log Horizon but not exactly the same. I liked the shimmer and shine effects from the jewels on the Gundo Sniper Rifle, and the water effects in the animation were used quite well, as well as the dazzling neon effects from the back lights (I like the coloring).  There is not any noticeable background music, but the opening and ending would be nice on an iPod as you get through your work-out/job. The opening song does sound a tad nasally at the beginning, but this might be sung that way to relate to the targeted age group. As for the production quality, I give it a 3 out of 5, which is a C in my book. This C means it’s above mediocre.

Pro’s, Con’s, and other thoughts:

Pros: I enjoyed the story, pacing, and characters. When watching an episode, it felt like I get to know more about the characters, the world, and the story, which made the show for me well worth a watch because it gives me more background about the situation while seeing how fun the character interactions were. There is an episode that might be considered a filler episode; this episode has a poem chanted/sung in it, but in it we learn more about the past and see more of the main three’s personality being expanded upon towards a certain situation that might not be worth it.

Cons: This is kind of a light nit-pick, but there should have been some more music involved. I can see for the most parts it’s not needed, but for some scenes it could have better intensified the situation.

Personal: I’ll give this portion a rating of 4/5. It was a highlight of my week.

-Performance: 4/5 (B) The characters sounded like they should, and the situations were presented well.

-Pace: 4/5 (B) I never thought that the show was lasting forever,and I thought two episode were one just by how fun and fast the show goes.

-Characters: 3.5/5 (B) I enjoyed the characters, but I would like to see more other ominous characters explored, which does get me to beg for season 2.

Note: Due to my own belief and further defining anime as a pop art, no rating will ever receive a 0, 1, 4.5, or 5 (a Z, F, or A in my book). For this reason is that times will change as opinions will follow differently. Anything can be far greater or worse than before. That’s just human triumph and error.

Someone needs to license the  Light Novels.

I would say 13 + for either gender due to slight innuendo, criminal situations, and light gore, however nothing scarring for those younger than 13.

This series should be as popular as Shakugan no Shana or A Certain Magical Railgun.

I did not have to ask, “Who was this for,” while watching this.

–Heaven’s Lost Property (Only by characters)

– Nyaruko: Crawling with Love! (Might be stretching it too far)

*Link to Chaika’s Coffin (I did not get permission to use the coffin picture): http://www.crunchyroll.com/anime-news/2014/05/18-1/cosplay-prop-maker-shows-off-chaikas-coffin

Please let me know what you think in the comments below, and if you’re now interested in the show please go to Crunchy Roll to check it out.